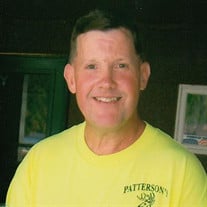 Well-known local meat cutter dies Scott Robert Patterson, a well-known local meat cutter, age 57 of Cambridge, OH passed away unexpectedly Thursday, February 13, 2020 at Riverside Methodist Hospital in Columbus. He was born July 7, 1962 in Zanesville to the late Robert L. Patterson and Joellyn L. Weidman of Cambridge, OH. Scott was Co-Owner of the former Patterson’s Meat Market, as well as his own deer processing business for over the last decade. Scott retired from Riesbeck’s as a meat cutter. Scott was a member of the Center United Methodist Church, and a 1980 graduate of Buckeye Trail High School. Scott was involved with Buckeye Trail Biddy League Football and he could be found behind the grill at any Buckeye Trail track meet for many years. He was involved in helping pass the levy for the Baker Activity Complex at trail. He said, “I do it for the kids.” He was a member of the 1979 All Ohio Youth Choir, marched in the Rose Bowl Parade, and was in the 1980 European Tour of the All Ohio Youth Choir. Along with his father, Scott is preceded in death by Grandparents, Audree and Martha Patterson and Raymond and Jean Larrick. Step-mother, Evelyn Patterson; Nancy Anderson. Scott is survived by his wife Pamela S. Danley Patterson whom he married August 24, 1985. One daughter, Courtney B. Patterson of Cambridge, OH. One son, Mychal D. Patterson and soon to be daughter-in-law Lexi Cooke of Painesville, OH. Two sisters, Missey Patterson and Robyn (Gary) Kyser all of Cambridge. Two brothers, Denny (Amy) Patterson of Cambridge and Dr. Alan “Joey” (Heather) Patterson of Dresden, OH. Two grandchildren, Marshal Patterson and Noah Davidson whom he adored and enjoyed spending time with every day and attending their activities. Nothing pleased Scott more than being Pappy to the boys. He also leaves nieces and nephews: Jacob Patterson, Troy Patterson, Sohpia Patterson, Alex Patterson, Sydney Patterson, Ellie Kyser and Keaton Kyser. A very dear and special friend, Terry Chapman and his son, Tony Chapman. Friends may call Tuesday from 2 to 8 pm and Bundy-Law Funeral Home and again Wednesday from 12 noon till 2 pm. The funeral service will be held Wednesday at 2 pm at the funeral home with Pastor Mark Smith officiating and burial will be in Center Cemetery. Memorial contributions may be made to the Guernsey County Cancer Society, 927 Wheeling Ave., Cambridge, OH 43725. An on-line guest book may be signed at www.bundy-lawfuneralhome.com.

The family of Scott Robert Patterson created this Life Tributes page to make it easy to share your memories.

Send flowers to the Patterson family.