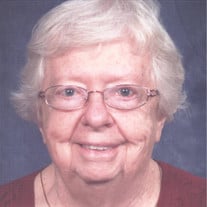 Rev. Virginia Ruth Geiger, 88 of Carey, Ohio formerly of Cambridge, went to her eternal Home with the Lord on January 12, 2019 at the home of her daughter, Teresa Clauss. She was born April 18, 1930 daughter of the late Floyd and Ada F. Nichols of the Winterset / Antrim area. She graduated from Madison High School in 1947. On September 26, 1947 she married Ralph N. Geiger. Virginia donated a kidney to her sister Janet in 1970. She was called into ministry in 1975 and attended Garrett Theological Seminary. She served at Rolling Hills Parish, Olive Branch, Bowerston, Wellsville and Belmont until her retirement in 1995. She served as a chaplain at SEORMC for 14 years. Virginia was a two time cancer survivor. She also volunteered at SEORMC with her husband Ralph. She served as a visitation pastor at Faith UMC in Cambridge. She joined Christ UMC and was involved in various ministries. She moved to Carey, Ohio in 2016 to live with her daughter, Teresa Clauss and was a member of Tiffin Harmony UMC. She was preceded in death by: her parents; her husband, Ralph N. Geiger in 2006; a son Todd Geiger; a sister Janet Nichols; and a sister-in-law Sandy Nichols. Virginia is survived by: her children, Karen (Duane) Lucas, Diane (Don) Wilson, Rhonda (Dick) Hagans, of the Cambridge area, Cheryl Sawyer of Suffolk, VA, Kiristi (David) Whitacre of Hilliard, Teresa (Mike) Clauss of Carey, Ramona Geiger of Coshocton, Ronnie (Laura) Geiger of Grove City and Theresa (Todd - dec.) Powali of Cleveland area; 22 grandchildren, 32 great grandchildren; two brothers, Raymond (Ruth) Nichols and Ron Nichols; a sister Beverly Luyster; many cousins, nieces and nephews; and an adopted granddaughter Anna Hoppe from Germany. Visitation will be at Bundy-Law Funeral Home on Wednesday, January 16, 2019 from 4 to 8 pm. Her funeral service will be held at Christ United Methodist Church at 2167 North Avenue Cambridge, on Thursday, January 17 at 11 am. Pastor Matt Wilson will officiate the service with burial to follow in Antrim Community Cemetery. Virginia’s online tribute wall may be viewed and signed at www.bundy-lawfuneralhome.com.

Rev. Virginia Ruth Geiger, 88 of Carey, Ohio formerly of Cambridge, went to her eternal Home with the Lord on January 12, 2019 at the home of her daughter, Teresa Clauss. She was born April 18, 1930 daughter of the late Floyd and Ada F. Nichols... View Obituary & Service Information

The family of Virginia Ruth Geiger created this Life Tributes page to make it easy to share your memories.

Send flowers to the Geiger family.