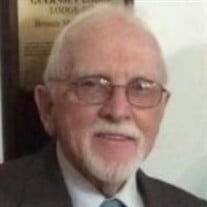 Willard Carl Warden, age 86 of Kimbolton, passed away on Monday, September 27, 2021 at his home. He was born in Cambridge on July 4, 1935, a son of the late Raymond Warden and Sylvia (Baker) Warden. Mr. Warden was a graduate of Cambridge High School class of 1953. He served his country in the U.S. Army from 1955 to 1957 and the reserves until 1963. In the mid 1950’s he owned a milk truck and picked up cans from farmers and deposited them at the Dairy Dell west of Cambridge. He worked and retired from the Ohio Department of Transportation and had also worked for GTE, Orme Hardware and Cambridge Township. Willard was one of the founding members of Cassell Station Fire Department. He was also a member of Liberty Community Volunteer Fire Department and Kimbolton United Methodist Church. He was a fifty year member and Past Master of Guernsey Lodge #66 F&AM, a fifty year member of the Valley of Cambridge Ancient and Accepted Scottish Rite. Willard was a former member of: the First Presbyterian Church; East Union Presbyterian Church; the Shriner’s; and the Order of the Eastern Star and a Past Patron. Among other affiliations were the Kimbolton Grange, the Fair Board and Kimbolton City Council. Willard had received a 10 Gallon Pin from the American Red Cross. Willard leaves: his wife Rose (Bowman) Warden; daughters, Lucinda (Greg) Hoffman of Indiana, Rebecca (Rusty) Hanes of Kimbolton and Celia Sholtz of Kimbolton; sons, Randall Warden of Cambridge, Garry (Cindy) Warden of Cambridge, John Paver of Cambridge and Charles (Heather) Warden of Byesville; 13 grandchildren; 13 great grandchildren and one great great grandson; a brother Gerald Warden of Kimbolton and many nieces and nephews. Willard is preceded in death by: his parents; a daughter Betsy Beatenhead; and three brothers, Roger, Richard and an infant brother Harold Floyd. Visitation will be at Bundy-Law Funeral Home on Wednesday, September 29, 2021 from 5 to 7 pm with Masonic services to be held at 7 pm. Covid precautions are to be taken by attendees. Funeral services will be held on Thursday at 11 am also at Bundy-Law with Pastor Mark Slay officiating. Burial will follow in North Salem Cemetery where Military Graveside Rites will be performed by the Guernsey County Veterans Council. In lieu of flowers, donations may be made to Hospice of Guernsey or the Shriner’s. Willard’s service recording and online guest book may be viewed at www.bundy-lawfuneralhome.com.

Willard Carl Warden, age 86 of Kimbolton, passed away on Monday, September 27, 2021 at his home. He was born in Cambridge on July 4, 1935, a son of the late Raymond Warden and Sylvia (Baker) Warden. Mr. Warden was a graduate of Cambridge... View Obituary & Service Information

The family of Willard Carl Warden created this Life Tributes page to make it easy to share your memories.

Willard Carl Warden, age 86 of Kimbolton, passed away on Monday,...

Send flowers to the Warden family.