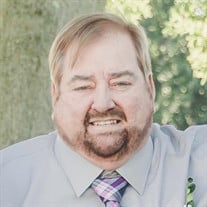 William Joseph “Bill” Beres, age 64 of Cambridge, passed away on Wednesday, April 24, 2019 at SEORMC. He was born in Lorain, Ohio, on June 18, 1954, a son of the late James J. Beres and Marjorie (Ellis) Beres. Mr. Beres was a 1976 graduate of Bowling Green State University and a two-time graduate of Hamburger University in Chicago, Illinois. He was the Director of Operations for the McDonald’s Corporation and worked primarily in Cambridge and New Philadelphia, as well as other locations in the Southeastern Ohio region. He worked at the Firelands Scout Reservation and traveled to Philmont Scout Ranch before earning the rank of Eagle Scout. He volunteered for many years with the Muskingum Valley Council’s Cub Scout Day Camp, including serving as Camp Director. He looked forward to competing anually in his fantasy baseball league, enjoyed playing FarmVille on his iPad, and delighted in playing cards and games with his family. Bill is survived by his children, Ben (Sarah) Beres of Huntsville, Samantha Beres (Samuel Pulley) of Wilmington, Nathaniel (Joanna) Beres of Tiffin, Jamison Beres of Cambridge, and Zachery (Christiana) Beres of Columbus; the mother of his children, Wendy Beres of Cambridge; three grandchildren, Mason, Kirk and Alexander; siblings, Thomas (Lynn) Beres, Barbara (Keith) Clark; an uncle, Paul Ellis; and many cousins, nieces, and nephews. He is preceded in death by his parents and a brother, James Beres. A celebration of life will be held at 11:00 a.m. on Monday, April 29, 2019 at Unity Presbyterian Church, located at 130 N. 7th Street Cambridge, Ohio 43725. Pastor Jeff Schooley will officiate the service. In lieu of flowers, donations may be made to The Kidney Foundation of Ohio, 2831 Prospect Avenue, Cleveland, Ohio 44115 or to the Ronald McDonald House, 711 East Livingston Avenue, Columbus, Ohio 43205. Bill’s online guest book may be viewed and signed at www.bundy-lawfuneralhome.com.

The family of William Joseph "Bill" Beres created this Life Tributes page to make it easy to share your memories.

Send flowers to the Beres family.