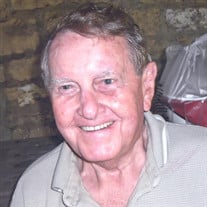 William E. “Bill” Carle, age 90 of Cambridge, passed away on Thursday, January 10, 2019 at the Beckett House in New Concord. He was born on January 8, 1929 in Springfield, Ohio a son of the late William Herbert Carle and Ethel Mae (Champan) Carle. Mr. Carle was 1946 graduate of Springfield High School. He served the next couple years in the U.S. Navy on the USS Ruben James. Bill started his career as a welder, then drove a bread route for Wholesome Foods for the next 10 years. He retired in 1991 from Prudential Insurance Company after 30 years of service. Bill was a member of the First Presbyterian Church, the Cambridge Rotary and the Guernsey Lodge 66 F&AM. He was an avid fan of the Ohio State Buckeyes and the Reds. He also enjoyed collecting antiques and spending time with the family. Bill leaves: his wife of 68 years, Joann M. (Law) Carle, they were married on June 25, 1950; three children, Diane M. McGarity of Denver, CO, Steven A. Carle of Decatur, AL and David E. (Michelle) Carle of Hartselle, AL; five grandchildren, Matthew (Erin) Carle, Amanda (Cody) McDaniel, Eli Carle, Wesley Connell and Nicholas Connell; and three great grandchildren, Beckett Carle, Isaiah Carle and Noah McDaniel; and a number of nieces and nephews. He is preceded in death by: his parents; a daughter Sandra L. Connell; a brother Wendel Carle; and a grandson Adam Carle. Visitation will be on Saturday, January 12, 2019 at Bundy-Law Funeral Home from 1 to 3 pm with the service beginning at 3 pm. Pastor Caleb McClure will officiate the service. Burial will take place on Monday, at 1 pm in Rose Hill Cemetery in Springfield, Ohio. In lieu of flowers, donations may be made to the First Presbyterian Church 725 Steubenville Avenue Cambridge, Ohio 43725. Bill’s online guest book may be viewed and signed at www.bundy-lawfuneralhome.com.

The family of William E. Carle created this Life Tributes page to make it easy to share your memories.

Send flowers to the Carle family.