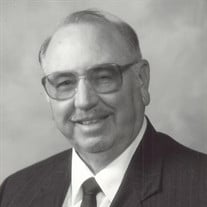 William E. Channell, age 86 of Cambridge, passed away on Wednesday, November 25, 2020 at Genesis Care Center. He was born on January 6, 1934 in Jackson, Ohio, a son of the late Ralph E. Channell and Audrey (Leach) Channell. Mr. Channell was a 1952 graduate of Jackson High School. He then received his associates degree from Ohio University. Bill was an engineer for GTE for over 33 years before starting his own business, Channell Engineering. He traveled the east coast for around 15 years with his engineer company. Bill was a long time active member of the Ninth Street United Methodist Church. For decades, he was active with the Boy Scouts as a leader and council member, he was also a Silver Beaver recipient. He was also a member of the Cambridge Lion’s Club, where he had been past District Governor. He was a member of the Scottish Rite and Cambridge Lodge 66 F&AM where he was a 33 Degree Mason, Past Master, Past Chapter Council and Commandry and received the Knight York Cross of Honor. Bill leaves his wife of 68 years, Betty Louise (Goodwin) Channell, they were married on June 15, 1952; a daughter Christine Perry of Cambridge; two sons, William Steven Channell (Kathaleen Soter) of Cambridge and Douglas Paul (Glady) Channell of Pittsburgh; two sisters, Shirley Waugh of Jackson and Janet “Kathy” Burgett of Obetz; grandchildren, Carrie (Travis) Breeden, Paul Channell, Steven Channell and Sarah McClelland; two step grandchildren, Christie Cole and Jessica Asti; 16 great grand children; and several beloved nieces and nephews. He is preceded in death by: his parents; a son-in-law Joseph “Red” Perry; a daughter-in-law Kathy Channell; a brother Robert Channell; two sisters, Joann Goodwin and Linda Ervin; his younger siblings, Pauline and Charles; and an infant son Charles. A memorial service with burial will take place at a later date. In lieu of flowers, donations may be made to the Ninth Street United Methodist Church at 129 North Ninth Street Cambridge, Ohio 43725. Bill’s online guest book may be viewed and signed at www.bundy-lawfuneralhome.com.

The family of William E. Channell created this Life Tributes page to make it easy to share your memories.

William E. Channell, age 86 of Cambridge, passed away on Wednesday,...

Send flowers to the Channell family.