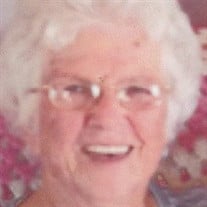 Wilma L. Larrick Doutt, age 89 of Cambridge, passed away on Thursday, December 12, 2019 at her home. She was born on July 2, 1930 in Cambridge, a daughter of the late Wilbur R. Larrick and Gladys Mae "Nellie" Evans Larrick. Wilma... View Obituary & Service Information

The family of Wilma L. Larrick Doutt created this Life Tributes page to make it easy to share your memories.

Send flowers to the Doutt family.